Posted on March 1, 2019 by Tenayistilign 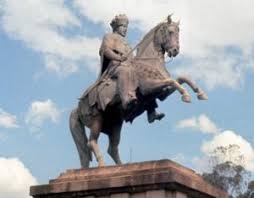 It is a victory that led to the idea for the Pan-African movement!

•1883 : Italian government buys Assab bay from Italian commercial firms
•1885 ( Feb 5): Italian landing to occupy Massawa
•1887 (Jan 27th) : Ras Alula defeats Italians at the battle of Dogali. Italians suffer 512 casualties.
•1889 ( March 9) : Emperor Yohaness IV fatally wounded in the battle of Metema against Mahdists, and names Ras Mengesha his heir. The death of Yohannes IV and the eruption of Great Famine (1888-1892) facilitated the expansion of the Italians as they met little resistance on their way.
•Menilek laid claim to the Ethiopian throne thanks to lineage reaching back to King Solomon and Queen Sheba. For Taytu Betul, marriage to Menilek ( who divorced princess Altash ,and had relationship with Bafena ) would fulfill a prophecy of royal destiny. Menilek and Taytu sealed their union on Easter Sunday in 1883. Taytu is of Oromo decent and was born in Semien, near Tigray with family contacts throughout the north bringing Menilek a local legitimacy.
•1889 ( March 26th): Menilek of Shewa declares himself emperor
•1889 ( May 2nd) :Treaty of Wuchale between Italians and Menilek. Antonelli signed on behalf of Italy. Article 17 stated in Italian version that Italy would control Ethiopia’s external affairs; the Amharic version said that Menilek could choose whether or not to ask the Italians to act on his behalf, but was not required to do so. Ethiopians said it was a trick; Italians blamed the Ethiopian translator (Geraz. Yosef Neguse who knew French but not Italian)
•October 1889, Italy declared a protectorate over Ethiopia on the basis of article 17.
•Queen Victoria expressed her happiness at learning of Menilek’s accession but advised him to send all subsequent messages to London through the king of Italy.
•A great Furor resulted at Menilek’s court. Count Augusto Salimbeni was called in and shown the Amharic version of the treaty. Menilek had been assailed by domestic critics for having “sold” the country. Empress Taytu came close to accusing her husband of treason.
•France never recognized the treaty of Wuchale despite Rome trying hard. The French government awarded Menilek the Grand Cordon of the Legion of Honor for his efforts to abolish slavery and bring “ civilization” to his country but refused arms.
•1890 ( Jan 1st): Italians formally establish colony of Eritrea
•1891 ( Nov 1st) MajGen Oreste Baratieri appointed commander of Italy’s African forces
•Menilek adhered to Article 16 of the treaty which provided for review after 5 years from date of signature.
•Feb 27, 1893 he declared to the governments of Italy, Germany, France and Great Britain that: The Treaty of Wuchale would be null and void as of 1May 1894 but that he is not nullifying friendship with Italy
•Feb 1894 : King Tekle Haimanot of Gojam and his army joins Menelik in Addis, was impressed by the palace; looking out he could see that the windows “ let in light, but not the wind”
•Isolated in Tigray, Ras Mengesha concluded that a sovereign Ethiopia was better than a colonial state.
•June 1894: he ( 32 yrs) and his army of 6000, Ras Alula and other chiefs arrived in Addis. Menilek pardoned them bringing Tigray back in to the empire. Menelik counseled Mengesha Yohannes not to make any rash moves against Italy. Highlands of Eritrea tried to rejoin the motherland; Italians quickly suppressed the insurrection.
•In 1894, Adwa was plundered by the native troops of Barattieri.
•Ras Mengesha marched to Koatit and Senafe in 1895 against the Italians.
•May 5 1894 , an Anglo-Italian protocol was issued which placed Harar within Italian sphere of influence. Paris objected but Treaty of Wuchale was mentioned as a reason.
•Pietro Antoneli was appointed the undersecretary of Foreign Affairs by Prime Minister Crispi ( who took power Dec 15,1893) send him to Menilek to resolve “their difficulties”. No one in Ethiopian believed any longer the intentions of Italy.
•1895 ( Sep 17th) Menilek calls for total mobilization of Ethiopian forces
•Estimated Ethiopian Army: 145, 0000 men of whom 57,000 mounted and 71000 with fire arms with 28000 having breech –loaders; 10,000 women lead by Empress Taytu. Ethiopia had 80,000 rifles, 8,600 horses and 42 guns
•1895 ( Dec 7th) Ethiopians wipe out Italian garrison at Amba Alagi
•1896 ( Jan 20th) Italian garrison at Mekele surrenders on terms
•1896 ( Feb 14): Menilek and Taytu arrive at Adwa

•1896 ( Feb 29th) : Baratieri decides to advance the night of the 29th.
•The Ethiopian guide (misdirection or sabotage) led the Italians astray.
•At 4 am on March 1st Menilek, Taytu and the Rases were at mass. A number of couriers and runners rushed in to report the enemy was approaching in force.
•The green, orange and red flag was unfurled and at 5:30 am Menilek’s 100 K strong army moved forward. The Ethiopian army was led by Menilek and Taitu (troops of Shewans, and south and south-western Oromos); Ras Mekonnen (troops of Harar); Ras Wolle (Yejju contingent-Amharans and Oromos); Ras Michael (Wallo Oromo army); Ras Mengesha (Tigrian troops); Ras Alula (Tigrian troops of northern frontier); Wagshum Gwangul (Wag and Lasta troops); Negus Teklehaimanot (Gojjam troops); and Ras Sebhat and Hagos Teferi (Agame troops).
•By 9 am Italian center crumbled.By noon retreat started.
•March 1st: Menilek destroys Italian army at the battle of Adwa. Italian loss: 6133 men killed ( 261 oficers,2918 while, 954 permanently missing, and about 2000 ascari). Another 1428 wounded ( 470 Italians including 31 officers, and 958 ascari). 3000-4000 taken prisoners. Italy lost 70% of its forces. Ethiopian losses: 4000 – 7000 killed, 10,000 wounded ( far smaller percent of strength)

I am a physician trained at Jimma Institute of Health Sciences ( now Jimma University, in Jimma, Ethiopia) and Wayne State University ( Detroit, MI, USA). I teach and practice General Nephrology/Hypertension and Kidney Transplantation in the USA.
View all posts by Tenayistilign →
This entry was posted in Uncategorized. Bookmark the permalink.