Posted on August 7, 2018 by Tenayistilign 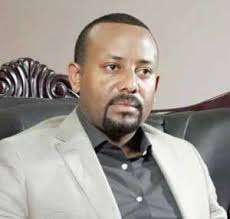 I can imagine that many of us have talked about the Abiy phenomenon since he came to power a little over 100 days ago.

I have been mentally wrestling with myself what term to use to describe the Abiy phenomenon and finally convinced myself that “perfect timing” would be appropriate.

Had he come to the scene few years earlier or few years later I would argue that he wouldn’t have become the promising leader that we all are talking about but instead a regular nice technocrat of limited significance. I strongly think that things were ripe for him to shine at this point in time in Ethiopian politics.

He came at the right time in the history of Ethiopian political struggle for real democracy. I disagree with other people who give him too much credit for the changes and sometimes try to make him a messiah figure or a cult leader which seems to be a very wrong way to understand and describe the situation and could be dangerous and may encourage dictatorship.

His rise to power needs to be understood with the preceding political events and bigger context of political struggle in Ethiopia. No doubt that he is the best messenger for reconciliation, forgiveness, peace, change, democracy and rule of law. He is the right leader at this critical time which Ethiopia needs desperately.

Timing is everything, so this is his time and we should see his role as part of a bigger picture of ongoing political struggle but not as a one man show.   I would say it is important to understand and acknowledge the significant historical events of our politics of the last half century to explain his ascendance to power.

He is the outcome of the multigenerational struggle for genuine participatory democracy and rule of law. He is the off spring of a very protracted conception, pregnancy, labor and delivery of a bitter political struggle and process which costed thousands of lives.

The struggle for democracy and rule of law has been fought by different groups in different forms and shapes starting from the Neway brothers, Mengistu and Girmame   coup d’état.   Countless Ethiopians sacrificed their lives under the umbrella of different organizations and popular movements including EPRP, MEISON, ELF,EPLF,TLF,TPLF,OLF,EPRDF etc and the original Yoyane movement, the Bale upraising and the Mecha tulema association etc…

The first real opportunity was created when Haile Selassie‘s monarchy collapsed which was exploited by some junior army officers who eventually hijacked the revolution and became dictators and killed, arrested or exiled their opponents.

A second opportunity was created when Derg fell and ERRDF took over. This was also wasted because EPRDF ended up being a dictator and oppressive regime primary serving the ruling class by marginalizing, alienating and excluding significant parts of the society.

The 2004 semi free election brought some hope but was quickly decimated when the fetus of democracy was aborted by primarily EPRDF antidemocratic actions and partly by failed leadership of incompetent, weak and divided opposition.

As the repression intensified the struggle travelled through different phases.

The current success has the following hallmarks

In early summer 2016, the popular protest and struggle seem to have peaked particularly in Oromia and Amhara regions where lawlessness, and socioeconomic unrest prevailed at which time ERPDF led government had to do something to avert the looming political and socioeconomic disaster threatening the integrity of the country.

EPRDF brought new faces to the OPDO leadership in the Summer 2016 in an attempt to ease the popular anger and protest. Shortly after that Irecha massacre happened in late September 2016 which exacerbated the ongoing strife and EPRDF had to declare a state of emergency which was extended and lasted for 10 months.

The new OPDO leadership was led by Lema Megersa who seems to be the main architect of the current political philosophy in the country. Lema was able to assemble and bring in young, educated group of people, aka TEAM LEMA, to the OPDO leadership and the region. Lema started by listening to the public’s grievances and spoke the language of the ordinary person and was able to convince many that he is on their side with his incredible oratory.

Most of his speeches were in Oromiffa and his power was limited to the Oromia region thus non Oromo speakers were unable to see his incredible political skills until recently. Lema introduced some reforms at the Oromia regional level including justice reform, land distribution, media reform, freedom of expression etc…which gave him popular support. He also did a lot to rein in corruption in OPDO and the region. Lema was able to recruit Dr Abiy Ahmed to the Oromia regional administration who was at the federal ministry of science and technology until summer of 2016. Abiy eventually became Lema’s deputy in the summer of 2017.

In early fall of 2017 Lema led a delegation to Bahirdar ( capital of the Amhara regional state) and broke the spell of artificially created and manufactured hate between Amhara and Oromo. He made a famous and impassionate speech at the event which gave him university admiration and put him on a national spot light and was also praised by the diaspora. He did the same with other regions including the South, Benishangul and Gambela. I belive this was a turning point in the country’s political dynamics proving that the different ethnic groups have nothing to fear of their differences and can live and coexist with tolerance no matter what.

As popular protest reached it’s peak causing subsequent strikes and siege of the capital, Prime minister Hailemariam Desalegn was forced to resign in an attempt by EPRDF to come up with some drastic measures/solution to solve the crisis. EPRDF also declared a second state of emergency. EPRDF government seems to have failed in bringing peace and stability despite using all tactics and putting all of its cards on the table so was forced to make some unconventional moves out of desperation.

The vacancy created by the resignation of the Prime Minister gave OPDO a chance to nominate the next EPRDF chairman and Prime Minister. Lema Megersa had the best chance to become EPRDF chairman and the next PM among the other leaders of EPRDF member parties but he was not a member of the federal parliament which essentially excluded him. He was a member of the regional parliament instead. OPDO as a party and Lema as its leader were very aggressive and publicly lobbied to get the position. OPDO made a very unusual move to give its candidate a better chance and remove even the perceived slightest hurdle it might face during the election process and to that effect OPDO decided to make Lema deputy and Dr Abiy chairman; essentially they swapped positions. Lema gets a huge credit for this maneuver which seems also selfless on his part to let his deputy take over his post and make himself a deputy.

This paved the way for Dr Abiy Ahmed to get a shot at the candidacy for the chairmanship of EPRDF and PM.    OPDO arm wrestled with TPLF during EPRDF meeting to get its nominee elected as chairman and was only successful after it got significant and tactical support from most ANDM and some SNNRP   members. Dr Abiy Ahmed became chairman of the EPRDF and elected by parliament to be the next PM in early April and after that the rest is history.

So far his performance is impressive and earned him majority support from all walks of lives even if he appears to have  some opponents from the old guard and hardcore EPRDFites.

I don’t intent to mention laundry list of his achievements in the first 100 days because they are public record and easy for anyone to see. Rather I will dwell in explaining his personal attributes, political advantages and political philosophy as mentioned below.

I believe we are just witnessing the beginning chapters of yet to be unraveled great life as a leader. Time will tell how far he can transform the struggle of the Ethiopian people in realizing real democracy, rule of law, peace, prosperity and stability.

We also shall see what kind of influence he will have on the horn and greater East Africa with regard to peace, stability and economic integration.

I also believe that the general public with well-informed active engagement and participation has significant leverage and can help him steer the wheel of change to bring the desired out comes benefiting all.

I have high hopes for him and believe that we will be talking and writing more about the remaining chapter of the Dr Abiy Ahmed’s phenomenon in the months and years to come. I can see more potential and greatness in his future.

I wish him, all Ethiopians, the citizens of the horn and east Africa good luck.

Dr Solomon Feyissa is a practicing physician based in the USA.

I am a physician trained at Jimma Institute of Health Sciences ( now Jimma University, in Jimma, Ethiopia) and Wayne State University ( Detroit, MI, USA). I teach and practice General Nephrology/Hypertension and Kidney Transplantation in the USA.
View all posts by Tenayistilign →
This entry was posted in Uncategorized. Bookmark the permalink.